Hi-Rez Studios are game developers that like to draw players into their ecosystem. They’re pretty good at it, too: the company often runs promotions with cross-game loot (like the recent Paladins mount/SMITE Awesome Chest promotion), and every Hi-Rez game makes subtle nods to the others. Of course, the references aren’t always so subtle, which brings us to Hand of the Gods: SMITE Tactics, a free-to-play card game on which SMITE players may be surprised to find themselves hooked.

Hand of the Gods isn’t just a card game, though; it does have a key word in its title: tactics. Instead of drawing and playing cards and leaving it at that, players will spread out their units over a board. Every unit has unique attributes: how many spaces it can move per turn, damage, attack range, passive effects and more. On each side of the board are the players’ Summoning Stones, which are not unlike Titans in SMITE. The player first to destroy the other’s Summoning Stone will be crowned the victor. 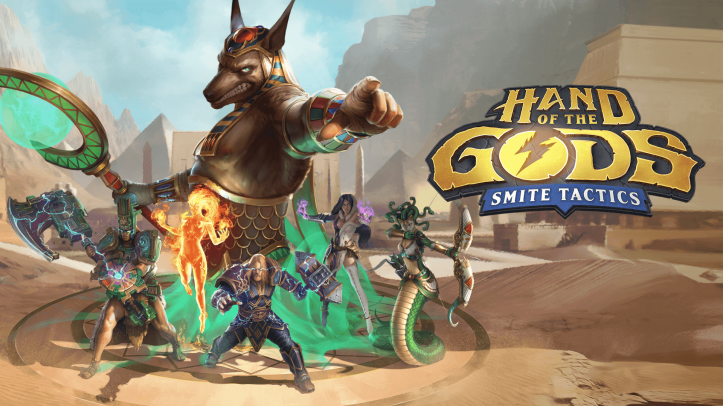 There will be a lot of spell casting, moving about the board and destroying the enemy’s units until it gets to that point, however. Units are nothing without their leader, and before queuing up a versus match, players can select from one of seven: Nu Wa, Ra, Odin, Ganesha, Bellona, Ah Puch and Zeus. Each leader has a unique attribute, and cards can only go into decks under their proper pantheon leader. There is also a set of neutral cards, which can be used in any deck. Each pantheon has its own play style: Odin thrives in the early game, Nu Wa buries her opponents in a flurry of spells, Ra will heal his way to victory, and Ah Puch will overrun his enemies with his ability to spawn zombies.

Despite being a genre on the polar end of the spectrum from a MOBA, Hand of the Gods feels like home for SMITE players. The art style, card art and music are familiar. A nice touch is that cards’ abilities tie back to their SMITE counterparts: Thor gains power when surrounded by enemies, Ymir can freeze, Sol’s attacks hits enemies in an area of effect, Bakasura consumes another unit, and Today, while playing SMITE, I realized the Titans on the Joust map — to which I’ve never given so much as a second glance — are cards in Hand of the Gods. Even something as unimportant as the mana camp enemies make an appearance in HotG.

While I’d be lying if I didn’t admit the word ‘SMITE’ is initially what drew me in, the tactics perspective gives Hand of the Gods depth and has helped capture my attention more than others in the past. Players can’t skate by with the cards in their deck alone; they must know how to move around the board in a way that will bring victory. Each pantheon feels fun and different to use, and, at least from a casual player’s perspective, different strategies are viable. From my experimental “All Units No Spells” deck to more serious decks that synergized the leaders with their pantheon cards, games were won and lost in a variety of ways. Deck crafting and facing off versus human opponents are thought provoking, and executing a successful maneuver is rewarding and makes me want to hit ‘Play’ again.

And hit ‘Play’ I did. It’s easy to when matches can end in just a few turns, especially for those coming in from the SMITE side of things where 45-minute Conquest games are a Season 5 regularity. Losses don’t feel so bad when it’s only wasted a few minutes of time, and it’s easy to move onto the next against a brand-new opponent. Queue pops were usually under one minute, and player base is less of an issue in a 1v1 card game with likely no regional matchmaking because ping doesn’t matter.

On the downside, the game does have a few bugs, which will not surprise anyone who has played a Hi-Rez game. The developers’ games are in constant development, and it’s not likely the bugs will go unattended long, but they did cause frustrations; for example, a daily quest to win three games with Ah Puch didn’t recognize one of my wins. During gameplay, some elements could be more clear, especially visually; sometimes I struggled to tell what a unit’s current range or attack status was at a quick glance, and some card effects could be explained better.

As is always a concern in a free-to-play game, players unwilling or unable to open their wallets need not worry about being left in the dust. Card packs and single cards are reasonably priced with in-game currency, and players can get a bonus pack for their first win of the day. Daily quests, leveling up leaders and login bonuses will add to the amount of currency and cards in players’ pockets. As is Hi-Rez’s M.O. with the SMITE Ultimate God Pack and Paladins Founder’s Pack, a fair purchasing option is available: for $19.99, the Hand of the Gods Core Set includes every card from the Chinese, Egyptian, Greek, Mayan and Neutral pantheons. Entire pantheon sets, which include every card from a pantheon, are separately purchasable for $7.99. Cosmetics, which do not affect gameplay, can also be purchased in-game.

While not perfect, Hand of the Gods is a surprisingly fun spin on both the SMITE universe and the card game genre. The free-to-play options are fair, strategizing is a blast, and outsmarting your opponent is satisfying. As silly as it sounds, there is something about the familiarity of the SMITE characters that is appealing to veterans who have dumped a lot of time into the MOBA. This one also comes without the woes of 12-minute ranked queues, AFKs and leavers, and a reliance on four other people. And it’s no coincidence that matches are the perfect length to play during queue or a ranked lobby.